1983, The School of Time-Based Media Skolen for Tidsbaserede Medier

The room was empty (it would later be filled with drums and unorthodox fashion) apart from the man in shadows at the other end of an seemingly ever expanding room. Facing west and turning north I followed him into a different room. This room was not empty, but it was seat-less. No four legged creatures on which to rest ones exhausted legs, the indoor climate so inherently unpleasant.

The room was lit and on the floor there was something unseen, or rather, it was just out of sight, hidden under what it was carrying, something heavy, making it seem weightless and hovering over the parquet. It was carrying metal; heavy, solid, shining.

The man who led me there was still in the room, looking somewhat nervous. He looked at the almost solid metal blocks. He could see that the blocks were not complete hyper-rectangles; there were recognizable images cut in the blocks. Reliefs. He could still see shimmers of other potential casts and stoneware reliefs, discarded due to practical conditions.

Now, the reliefs were cut in aluminium; a perfect compromise, and possibly a better solution. Their beginning was binary, set in order by software and complex bio-chemistry. High powered light beams shaped the aluminium into figurative layers. Aluminium, a metal with local pedigree, space age usability and biological hostility.

The relief on the right looked like a stylized jungle, with a sun and a snake. A detail of a 3d wire-frame, a draft of the relief, would have looked something like this: 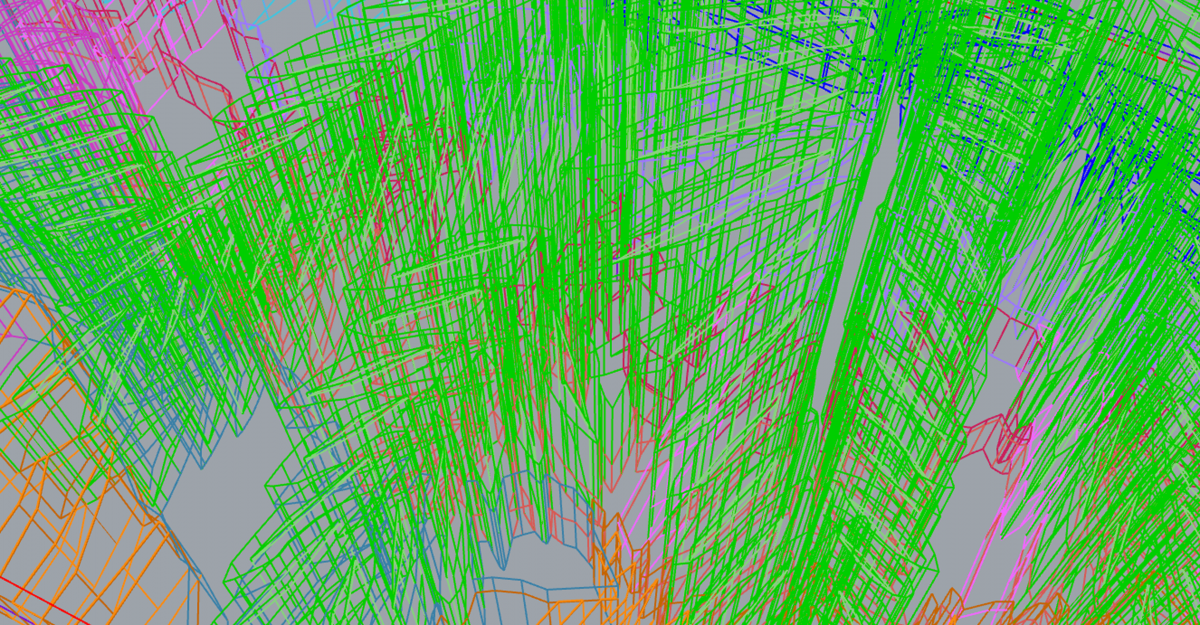 When he looked at the relief, he was reminded of the sort of jungle that The Black Girl would beat her way through in search of truths and God, as told by an Irishman and illustrated by an Englishman, or maybe a primeval forest?

The second relief portrayed a man holding a book in one hand and a piece of paper in the other, and in the background, there were buildings, some symbols and what resembled a rocket being launched. The rocket was a distinct rocket shape, like the one in Tintin or the V2’s fired from Penemünde; famous for their screaming destruction of London. And the screaming coming across the sky; opening a famous American death-cult tech paranoia detective novel.

One of the only things I could remember from classical studies was the ionic pillar. So of course there was such a thing in the second relief.
The other man saw both potential and death in the second relief. He was familiar with the reference points in both style and symbols. The knifed edge of technology that could erupt so quickly, made him believe that, we could be standing at the threshold of a childhoods end; something that would definitely destroy the current human condition.
‘… continuity of our spiritual existence after death’ , or at least a symbolic death.

Looking at the third and last relief, I felt the momentum of the implied narrative. I felt, and I knew he felt the same thing, the ideas of a certain Jesuit’s spiritual concepts concerning human potentials, which the Jesuit thought would lead to the gods-head, or maybe less theologically, the Omega Point, Star Maker, UI, AC or similar. We were imagining being taken by our hands, while standing on a hill top, and sent traveling through time/space, and from a distance, we would watch how amino-acids in rapid haste evolve into primitive life, evolving into intelligent life, evolving; for me and him and us, into a incomprehensible life, evolving further into light/energy/eternity in the same plane as an imagined state of Absoluteness. That was the ambitious plane of the reliefs, positive potentials from contemporary fears.
It was three figures holding hands in an undetermined space, with stars and impossible mechanics as their only witness; a last and a first.